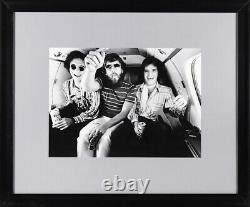 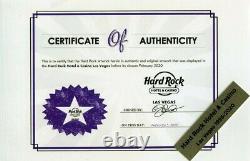 OWN A PIECE OF ROCK "N" ROLL HISTORY. Are authentic and original photos taken by legendary photographers that were on displayed in guest rooms of the Hard hotel and Casino in Las Vegas. Featured here is an authentic and original photo of Creedence Clearwater Revival. That was displayed in one of the guest rooms of the hotel. The photo was taken in 1970 somewhere over Memphis in a Learjet by iconic photographer Jim Marshall. It has been professionally framed and matted and is still housed in the original frame, which measures 30 x 36 inches PX133. The Hard Rock Hotel and Casino in Las Vegas opened its doors in 1995 and was the world's first rock and roll-themed hotel.

It included over 1,500 guest rooms and was frequently featured in television shows and music videos. Their music venue, The Joint, was a popular tour stop for even the biggest of bands. All photos have been professionally framed and matted and are still housed in the original frame, The back of the frame shows the original security locking brackets. All photos are in pristine condition, whereas the frame shows common and moderate signs of display, such as the occasional scratch, chip, or dent.

Each photo comes with a "Certificate of Authenticity" and Commemorative Plaque? Phenomenal opportunity to own a prestigious photo that is professionally framed from a legendary Rock & Roll Hotel! Some of the Black & White photos might have slight foxing due to being on display for 20+ years. Please see all the Hard Rock photos I have available, on my site.

T This is a once in a lifetime opportunity. The item "Creedence Clearwater Revival Hard Rock Hotel & Casino Las Vegas Guest Room Frame" is in sale since Wednesday, December 15, 2021. This item is in the category "Entertainment Memorabilia\Music Memorabilia\Other Music Memorabilia".