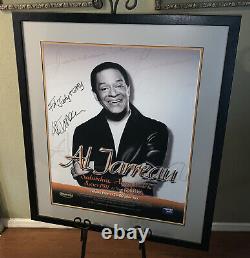 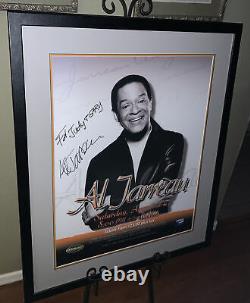 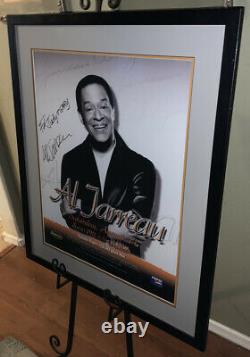 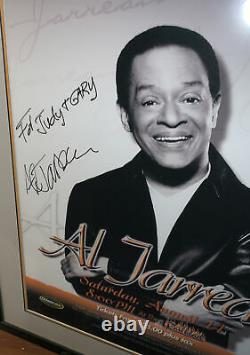 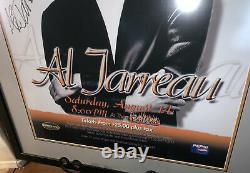 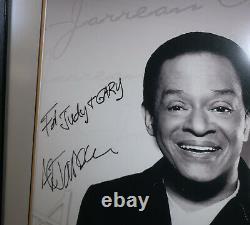 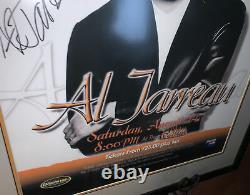 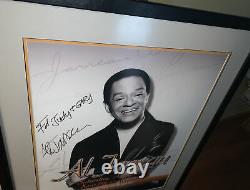 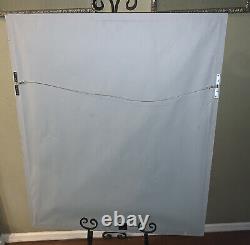 Railhead at the Boulder Station Casino. Signed: For Judy & Gary Al Jarreau. This is professionally Framed, frame is approximately 30 widecand 36 tall. Very rare and a super addition to any collection.

About the artist: Al Jarreau (born March 12, 1940 - died February 12, 2017) Award-winning American jazz, R&B and pop singer whose hits included the theme tune of the 1980s television series Moonlighting. Jarreau was broadminded enough, and talented enough, to have won three of his seven Grammys in different vocal categories jazz, pop and R&B. Although some of his music over the years exhibited a radio-friendly funkiness that could veer towards the bland, his singing still fizzed with the risk-embracing vocal pyrotechnics that first marked him out back in the 1970s.

He found himself pulling increasingly multicultural and multigenerational crowds in his later years. Jarreaus remarkable vocal range spanned the soulfully jazzy romantic lightness of an African-American male tradition running from Nat King Cole to George Benson and on to José James, and a bebop-derived improv agility as a wordless scat singer that always reflected the methods of his first jazz model, Jon Hendricks. Jarreau could also mimic the sounds of all manner of instruments with such uncanny accuracy that a ghostly Brazilian berimbau-player or a battalion of samba-shuffling Latin percussionists could often seem to be hiding in the wings. His best-known work included his 1981 album Breakin Away (with its Top 20 pop hit Were in This Love Together), his performance of Moonlighting, composed for the popular 80s TV series, and the star-packed Givin It Up (2006), a hit-swapping dialogue with Benson. Into his 60s, Jarreau also reached new audiences with symphony-orchestra settings for his work, and his explicit R&B and soul roots (though he loved and understood jazz, he did not see himself as a jazz singer) also brought an intrigued new generation of listeners into his orbit.

The item "Al Jarreau Signed Large Concert Poster Railhead Las Vegas Framed Autographed" is in sale since Sunday, May 16, 2021. This item is in the category "Entertainment Memorabilia\Autographs-Original\Music\Rock & Pop\Photographs".stuff" and is located in Las Vegas, Nevada.